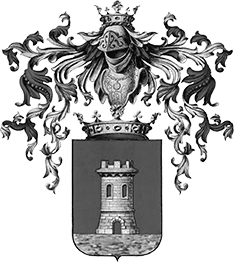 Built in Piazza Colonna in front of the Palazzo Chigi and the Column of Antonina, built in 183 AD, Palazzo Ferrajolisorge in the area where the houses were originally of Del Bufalo – Cancellieri, a family of ancient Roman nobility merged with the Cancellieri of Pistoia. Related to the most distinguished Roman families, the Del Bufalo held civil office in the Curia and in Campidoglio, giving the name to the square that in the 500s was called the Cancellieri. First rebuilt in 1561 by the architect Giacomo Della Porta, in 1602 the building was renovated by Francesco Paparelli taking on its current appearance. It was the home of other prelates, men of the arms of the ecards. In 1728 the building passed definitively to the NicarchiniMarchesi, following the marriage of one of Del Bufalo’s daughters. During the Napoleonic empire, Cardinal Giuseppe Fesch, uncle of Napoleon Bonaparte and ambassador of France to Rome, lived there. In 1850 it was bought by the Marquis Giuseppe Ferrajoli.

From the marvelous Collo coclide, which is seen raised in that square, it takes it, and the Rione the name. This stupendous mass was erected by the Senate, and Roman People, and by the Emperor Marcus Aurelius dedicated to Antoninus Pius his father-in-law; and because this had not done anything noticeable in war, you had the deeds done by yourself done in the Marcomanna war, and in the top put the statue of that pious emperor. This trophy of the Roman magnificence is tall, palms one hundred seventy-five and there are hollowed out 190. steps with 40. small windows, with which one goes comfortably to its summit surrounded by a railing, where the whole city is enjoyed.
Finding himself this for his very broken old age, Sixtus V. in the year 1589, restored it, and instead of the statue of that Emperor, he placed that of s. Paolo Apostolo made of gold metal palms high 19. Gregorio XIII. having adorned the square with the fountain of virgin water according to the design by Giacomo della Porta, the Pope Alexander VII. he reduced it to the present state. The Merchants, and Curiali, are the leaders in this, especially since they are the offices of the Notaries of the Reverend Apostolic Chamber, and the residence of the Vicegerent of Rome. 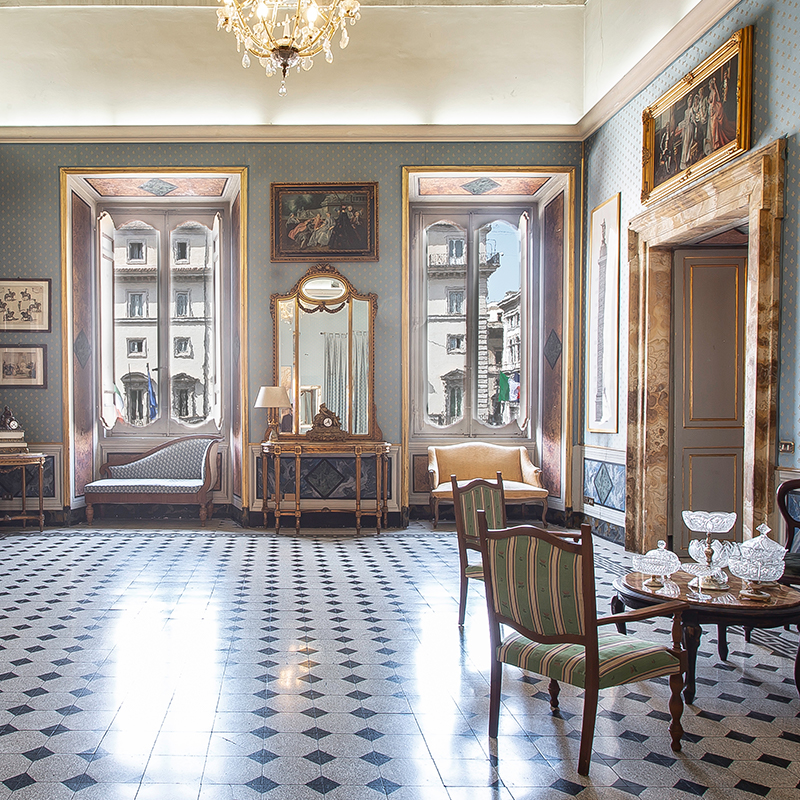 It is characterized by Florentine lilies set by the ceiling and the tapestry. The lily was the symbol of the noble Roman family the Marquis Niccolini owners of the building in 700. The walls there are ancient prints of women and knights of the Bourbon court.

It is characterized by the view of the Antonine Column. The color of this room is of blue damask, in the center of the wall there is a fireplace of fine Egyptian marble, on the walls there are prints representing the eighteenth-century Rome.
GALLERIA

The Hall covered with light damask, is called this because in a shop window the gloves and slippers and other relics of Pope Pius IX are kept. Under the coffered ceiling you can admire a caprice with eighteenth-century frescoes.
GALLERIA

This room is characterized by a Venetian mosaic floor that matches with the fireplace and the original eighteenth-century ceiling. In the whim below the ceiling we can admire the coat of arms of the Marchesi Ferrajoli and the paintings depicted the estate of the family. Considered the most fascinating room for the harmony of its colors in the various shades of red.
GALLERIA

The coffered ceiling, the light damask surmounted by a Fregio di Grotteschi, a console of 1770 surmounted by an antique clock. The mirror gives a sense of perspective back to the six adjoining rooms. Also from this you can admire the Colonna Antonina and Palazzo Chigi

This room is located at the corner of Piazza Colonna and Via del Corso, surrounded by a balcony. Also this as the red room has a Venetian mosaic floor. The predominant colors of the room are white and antique pink. On the wall you can admire a painting representing Piazza Colonna in the year 1900 in an ancient print of the Piranesi representing the Trajan’s Column. The finely decorated coffered ceiling has been repeatedly photographed for interior design newspapers for its beauty

From the Last Hall you can easily access the terrace of about 80 square meters, in the middle of the roofs in the heart of Rome